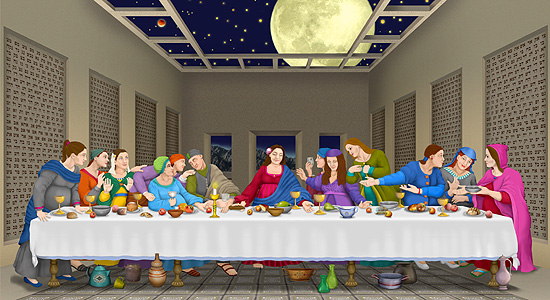 A fresh, contemporary interpretation to the world's famous masterpiece.

One of the world’s greatest masterpieces was completed in 1498 on the wall of Santa Maria delle Grazie church in Milano, Italy. Leonardo da Vinci was 40 years old. It took him 4 years to complete his masterpiece.

Five centuries later, “The Last Supper” continues to inspire artists of modern times, who re-created the scene, giving it their own interpretations and presenting it in contemporary versions.

Being born in the land where the history actually happened, I took the liberty to create my own version of “The Last Supper”.

My own version of "The Last Supper" ignores any religious aspects, and offers a new meaning to the subject of festivity. Here I took da Vinci’s creation in a different direction:

This is a celebration of a night before new souls are incarnated: The boards on the walls show Hebrew letter-combinations, which compose the genetic code of the universe. The Large moon in the sky symbolizes the feminine energy of revival and rejuvenation.

A significant symbol for birth and new beginnings is the feminine figure which carries the seed of life.

The figures in da Vinci’s original masterpiece were replaced here with twelve pregnant women, who are expecting to give birth the next day.

These women are the vessel through which new souls are incarnated. Their “Last Supper” is a celebration for their forthcoming fulfillment.

One male is present in the scene to demonstrate the balance of a human society.

A night of full moon symbolizes the feminine energies of creation and realization.

The Large texts on the walls are letter combinations of the Hebrew Alphabet, which, according to the Kabbalah – compose the genetic code of the universe.

The essence of this scene is of hope and expectation for good outcomes.

During my creation process, I chose to be loyal to da Vinci’s genius composition in order to let it reflect through my work.

This painting was created as digital art, and is printed as collectors’ limited edition on canvas. 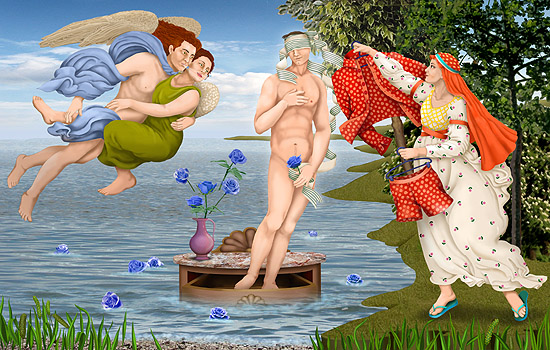 Birth of the new Man:

About a decade ago, I visited the Uffizi Gallery in Firenze, Italy, a large and most impressive art museum. A special hall was dedicated to Botticelli's creations and contained some of the greatest masterpieces ever created. As I stopped in front of "The Birth of Venus", my eyes expanded with awe and I was amazed by its rare beauty. At that moment I decided that someday, I will be able to paint this way.

"The Birth of Venus" was created around 1482 and has been restored in the 1990's. It glows with dazzling colors as it celebrates the birth of the Goddess Venus, emerging from the sea and glorifying the feminine powers of the universe.

As all of us – men and women alike, possess masculine and feminine qualities within our personalities, I have chosen to present the new modern man as my own interpretation for Botticelli's masterpiece: The self-conscious man who recognizes his own feminine aspects and enjoys the rewards of well balanced life.

The scene of a birth (or revelation) symbolizes the tremendous social changes that Western civilization had gone through over the past few decades. The differences in gender roles became blurred, and allowed individuals to express their personality without fearing to appear more 'feminine' or more 'masculine' or bound to certain gender behavior, dictated by conservative 'dark' society. 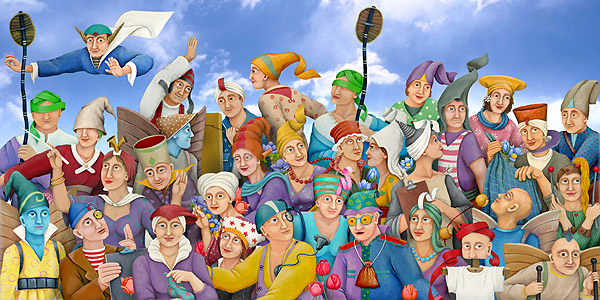 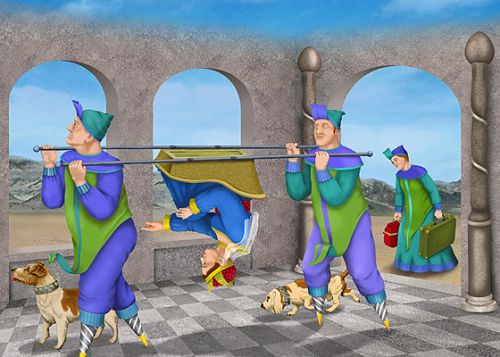 Queen Izabel
2008
Protest is the leading expression of personal integrity. 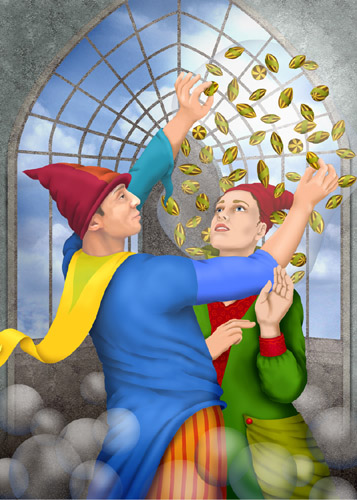 Thoughts have great power. In order to control them, we isolate them to smaller particles, and confront them individually. 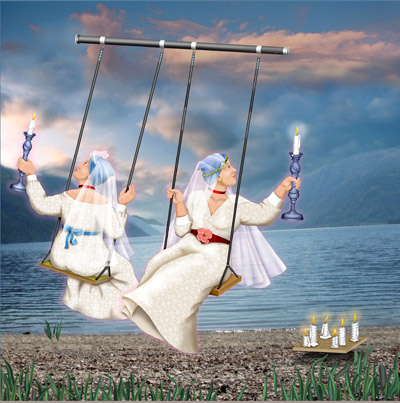 When a spiritual idea, which is a life lesson needs to be realized on the physical plane, and to be "reflected upward" in two different ways - The soul is divided into two similar parts, in two independent bodies, carrying similar Karmatic load. 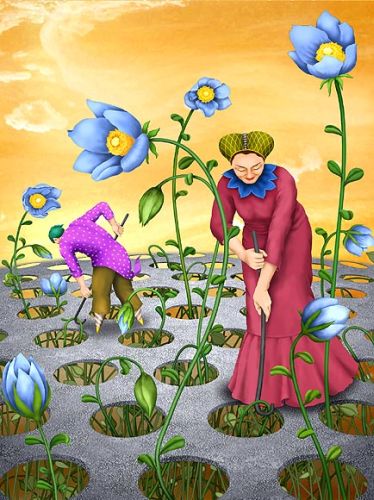 Let’s be thankful to people who make us happy. These are the gardeners who make our souls blossom. 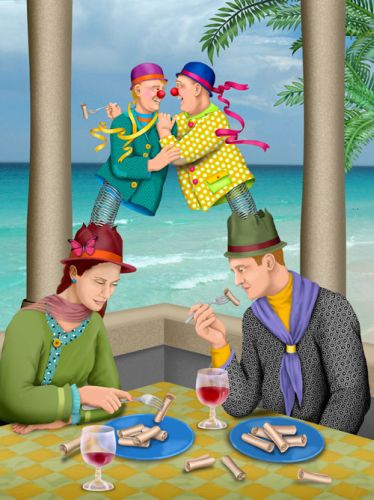 Subliminal
The Different Levels of a dialogue (2008)

Human behavior is conditioned by social norms and codes of conduct.

We come upon our peers with appropriate social manners and usually communicate with a thoughtful and polite approach. As we do so – we take into consideration many factors that have to do with the way we relate to the other person. It might be a spouse, a child, a close friend, a boss, a distant family member, or the sales person whom we talk to in the store – each one is treated with a different approach – depending on the length of acquaintance and closeness to us.

All this social practice happens on the external level. However, humans are as deep as the ocean and beyond… There are so many levels to our existence, and so many ways to relate to other humans, starting on the physical level, and ending on the numerous spiritual levels.

Our existence as a group of souls is eternal. We have been together in different forms many times in the past, present and future. The links between us are deep and laden. Our internal way of communication is at a level where our authentic essences meet: free of pretenses, free of artificial social restrictions.

The painting "Subliminal" shows us the contradiction between the external and internal relations. 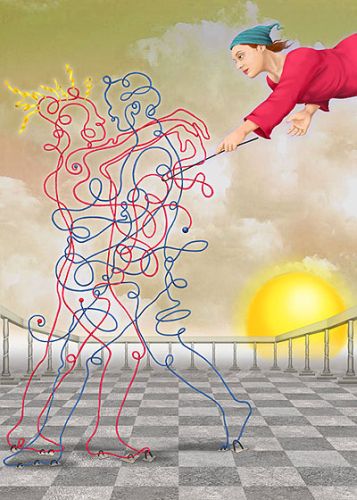 All complications, conflicts and mutual involvement are manmade. Are these things really as complicated as they look out of the maelstrom? 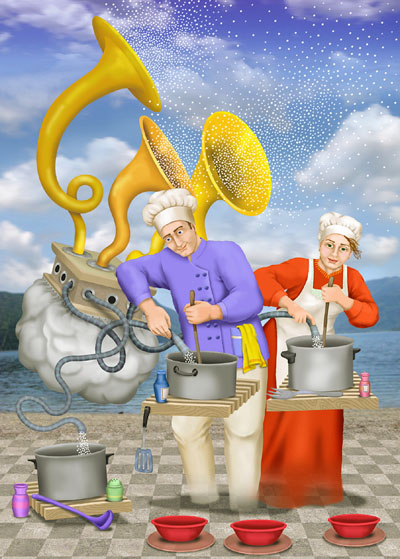